How to Buy A Voter List for the State of Michigan

In the Great Lakes State of Michigan, election seem to happen all the time.  Michigan is a unique state of industry and natural splendor, international border with Canada and by far having the greatest quantity of fresh water than any other state.  Did you know that there is a small section of Michigan that has been isolated since the Great Toledo War of 1836?  It's on a small peninsula just north of Toledo, Ohio and surrounded by Lake Erie. In settlment of the dispute, the Toledo Strip became part of Ohio and Michigan was given statehood and the Upper Peninsula as compensation.  Differing accounts of the dispute exist, but it seems the only fatalities were some livestock that were taken by militia members for meals and a single small knife stabbing of the Monroe County, Michigan Sherrif that was non life threatening. Michigan’s 10 million residents have been blessed with many of the most valuable resources of human existence with moderate (yet cold) winters leading to beautiful, lush summers that are the envy of many from warmer climates.  Tourism is the second leading industry of the state, next to its premier heritage in technology from a long history as the automotive capitol of the world.  Governing and regulating such a national treasure is an awesome responsibility, and the citizens of Michigan take it seriously.

In recent years, Michigan has become a classic “swing state” having supported Carter, Regan (2), G. Bush Sr., Clinton (2), G. Bush Jr. (2), Obama (2), Trump & Biden.  Most of these elections were remarkably close and the outcome can never be assumed from the voters of the Great Lakes State with it’s 83 counties, 15 US congressional seats, 2 senate seats, multiple cities and towns, judges and school districts and all the local issue proposals.  Elections in Michigan, like many large states, are a never-ending task.  How does one campaign differentiate itself from all the others in such a political environment?  In recent years, campaigns have come to rely on technology and that requires good data.  Voter list data for the State of Michigan is available to those campaigns clever enough to find it and use it to get their messages out to the people who count; the voters. 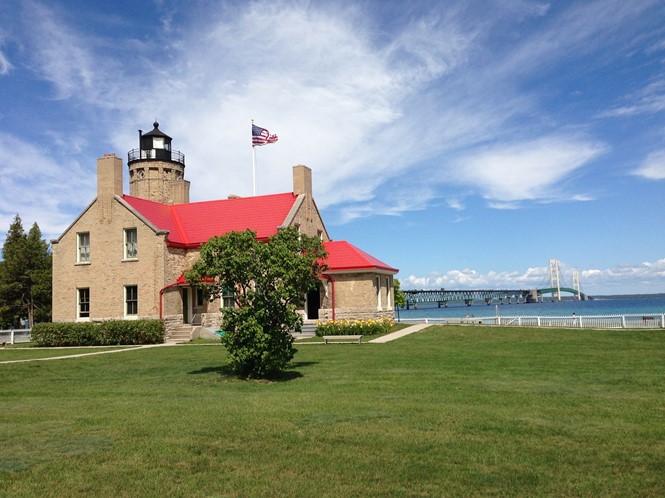 WalkLists has secure, accessible voter data for the State of Michigan that is prompt, accurate and reasonably priced with filtering features to get in touch with the relevant voters all these campaigns want to focus their efforts on.

Here is a small sampling of the type of data available for Michigan: 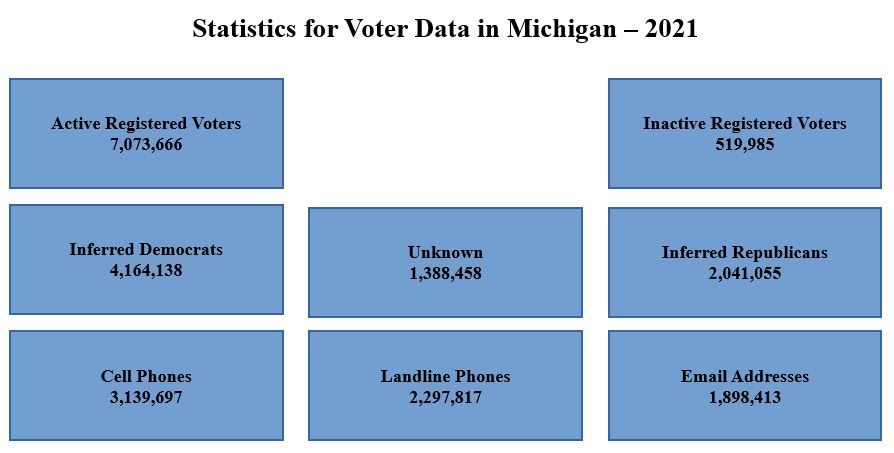 What you may also want to remember about Michigan voters is that they are very independent as partisans and may swing elections one way or the other for different reasons.  The term “Regan Democrats” is usually affiliated with this unexpected result from the 1980’s and more recently, Hillary Clinton was taken back when she lost to Donald Trump in 2016.  But Mr. Trump certainly didn’t own Michigan as voters there backed Mr. Biden in a classic “swing-state” contest that gave Biden the edge by just over 5%.  The political mood and climate of the previous two years has typically energized the enthusiasm of both major parties and driven results in tightly contested races.

The state is generally thought of as divided into two parts; The Southeast, with Metropolitan Detroit, reaching up as high as the industrial cities of Pontiac, Flint and Saginaw and west as far as the capitol in Lansing, and the Western-Northern sections of the state, including the major city of Grand Rapids as well as more medium size cites such as Muskegon, Traverse City, and even more rural areas of the north (including the Upper Peninsula). The Southeast area has traditionally supported Democratic candidates with a higher percentage of union members as well as the state’s higher density of minority citizens, while the Western-Northern areas tend to lean towards supporting Republican candidates.

Michigan’s voters have diverse background when comes to religion as well. The top three most popular   religions among voters are Protestants, with around 2.1M voters, Catholics, with 807K voters and about 290K Jewish voters. About 4.2M voters have unknown religious affiliations. Michigan also has a relatively diverse population in terms of ethnic identification with about 74% identifying themselves as Caucasian, 14% identifying as African American, 5% as Hispanic, and the balance of 7% identifying as Asian, Native American or of Mixed ethnic heritage.  This diverse mixture of citizens gives candidates and campaigns a lot to consider when targeting their messages.

Step 1 - Prepare and “Do your homework”

Campaigns need to recognize and identify their base of support. There are a few questions any campaign must know in advance before even thinking of buying voter data.  The following is a list to guide campaigns towards the most important items required:

Consider these as a minimum of the basic criteria any campaign would need to recognize and identify along with any “unique” voter attribute or behavior for your specific campaign purpose:

1.) The Full Name and eMail Address of the Requestor

2.) Identification, by name, of the Campaign requesting the data (if it exists)

3.) Provide a Valid Budget expectation so we can focus on a suitable data set

4.) Provide the specific and formal “Jurisdiction of Interest” boundaries for your data request

5.)  Consider:  are emails of voters a requirement?

6.) Consider: are cell phone numbers of voters a requirement?

7.) Consider: How urgently do you need this data to be delivered?

Step 2 - "Share this Information"
(from above) using one of the following:

- Email your request with this information to us at info@scalecampaign.com

For either service we will need to confirm and verify the identity of the individual, the campaign organization requesting the service (see step one, point 2) and the filtering criteria described in the section above.

With our Express Service you can get very rapid access to data that includes voter data with mailing addresses, voter history, additional criteria like policy support and many others, cellphones where available, and unverified emails where available. Express Service is often within hours during most normal business days.  Small campaign data request should certainly consider Express Service as the price may not be as restrictive with small numbers, while larger campaigns would be well advised to consider “Standard Service” as cost for a large campaign datafiles can become quite large as well.

With our “Standard Service”, we offer the same great quality of voter data at a more comfortable price, and we are also able to provide verified emails. In general, for just voter data and cellphones it may take day or two business dates to get you the data from “Standard Service”, whereas with verified emails required, it may take up to four business days.

In both services, a minimum price will be applied as some manual processing is always required to fulfill the requests.

In addition to voter data for the State of Michigan we also offer every other USA state plus the District of Columbia.

We also have an application for generating canvassing maps that can be printed as multi-page pdf files with maps and map markers and voter information, or as an electronic version for paperless use with common mobile devices such as smartphones and tablets.

Also note:  We can provide universities with special academic discount rates.  Please ask us for details if your interest qualifies.