The success of political activities, including elections, research and activism, depends on voter turnout historical data, as they incorporate it in their business. The majority of the voter databases are related to the registered voters in a specific region. Every country has a clear definition of voters. In the US, registered voters are defined as those allowed to exercise their right to cast a vote as electors on a set date or using an absentee ballot. The pool of individuals is predefined, and as a result, obtaining the voter lists data provides the interested parties with the baseline for building their observations, projects and campaigns. 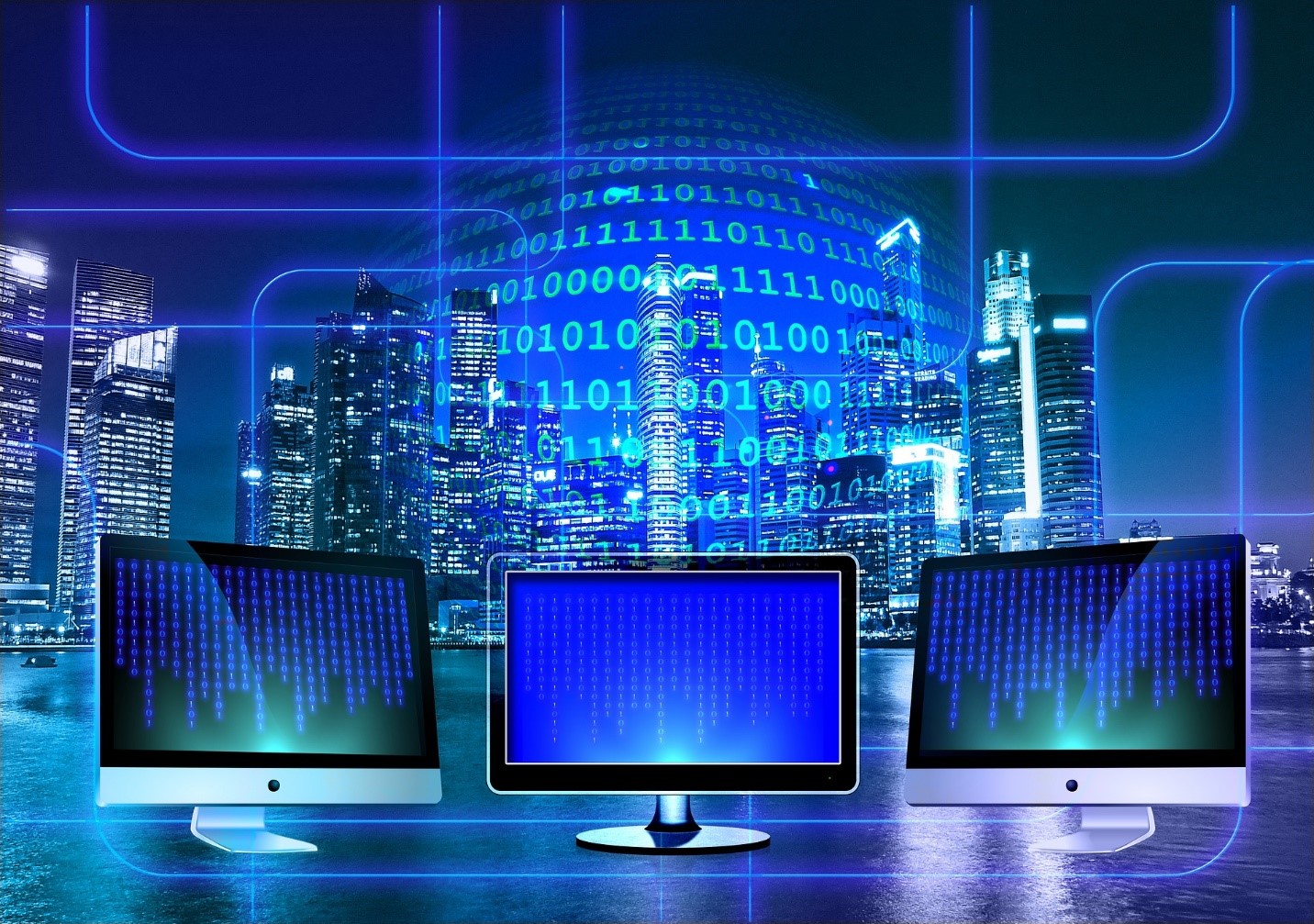 The use of election voter data is regulated in every state, with every state’s own rules in place. Moreover, the state’s regulations list the penalties for disobeying the rules. As a candidate, carefully read the rules for your particular state and comply with every clause in order to obey the law.

In some states, interested parties can purchase the data, but they have to send a request through old-fashioned means of communication, which means it takes a while for the data to reach the recipient. The format of the data presents difficulties for processing, and the volume of a single file is too large for existing tools to open. Moreover, it might take campaign multiple hours and expensive IT specialists to convert the voter data file into an operational format. In addition, the voter lists do not have much information about individual voters since they are scaled down.

The campaign should consider an alternative approach to gathering data, such as the Walk Lists platform at https://walklists.com. Walk Lists is a political and consumer technology platform that will allow the campaign to purchase voter data and create a voter list only within few minutes with our express service or use our traditional (standard) service. The purchased list will include numerous fields, selected by the user.

For states that have restriction on the data, a preapproved process is in place. Users have to apply with WalkLists and a verificaiton process will take place to confirm the identity of purchasing party and to provide all information to the party in order to comply with the law.  For more details on that topic check How to Buy Voter List for the State of California

The selection will introduce you to the workflow that will guide you in the voter turnout data selection.

It is important to read the message that appears on top of the selection:

“In order to successfully obtain just the data you may need, do not filter all available options. Focus on the ones you need for the race you are working on. For example, for State Lower House race, select two filters: State and State Lower House number. Often boundaries are crossed between different jurisdiction levels and we have extracted these numbers for you already to avoid duplicates.”

First, the users need to select the state they are interested in. In case there is more than one state of interest, the users have to separate the tasks and complete them per state. Since every state has its own data corners, voter data will differ from state to state.

Lock your state selection by clicking on the lock icon.

If your state is not found in the drop down menu, click on the “not found” option.

This action will bring you to another page, where you should submit additional information about the legal entity interested in collecting the voter information.

Secondly, after the state has been selected, the users have an option to select jurisdictions within the state and narrow down the search or move on to “Demographics” selection. 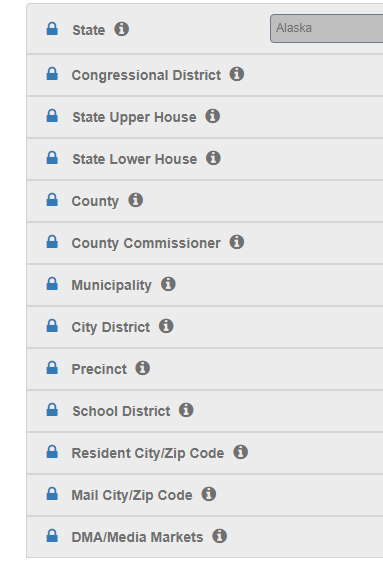 If the users choose to select jurisdictions, they may select one or more items from every level within the “Jurisdictions” selection. Some of the levels are connected, and the users do not have to know what parts of the county are included in a federal district, among other things. Often, political boundaries intertwine and cross over different districts and counties, forming peculiar shapes. Walk Lists  recalculates the political intersections using its engine and provides nicely cut data chunks.

After selecting jurisdictions, the user will trigger the system to start keep track of the total voter count that the users can purchase right away if the checkout option appears.

Alternatively, if the users decide to skip jurisdictions and move on to demographics, they will need to select age range or gender preference for the desired list of voters.

Demographics selection is not mandatory. 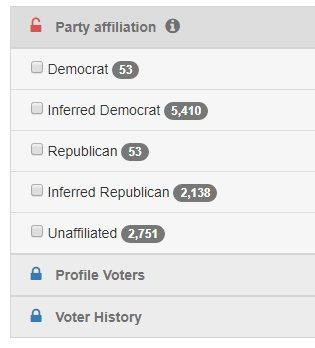 The second option includes profile voters. It gives users the opportunity to select specific criteria related to the registered voters. The 24 criteria included in Walk Lists are

The above mentioned criteria are not fixed and might change depending on the existing trends in society. 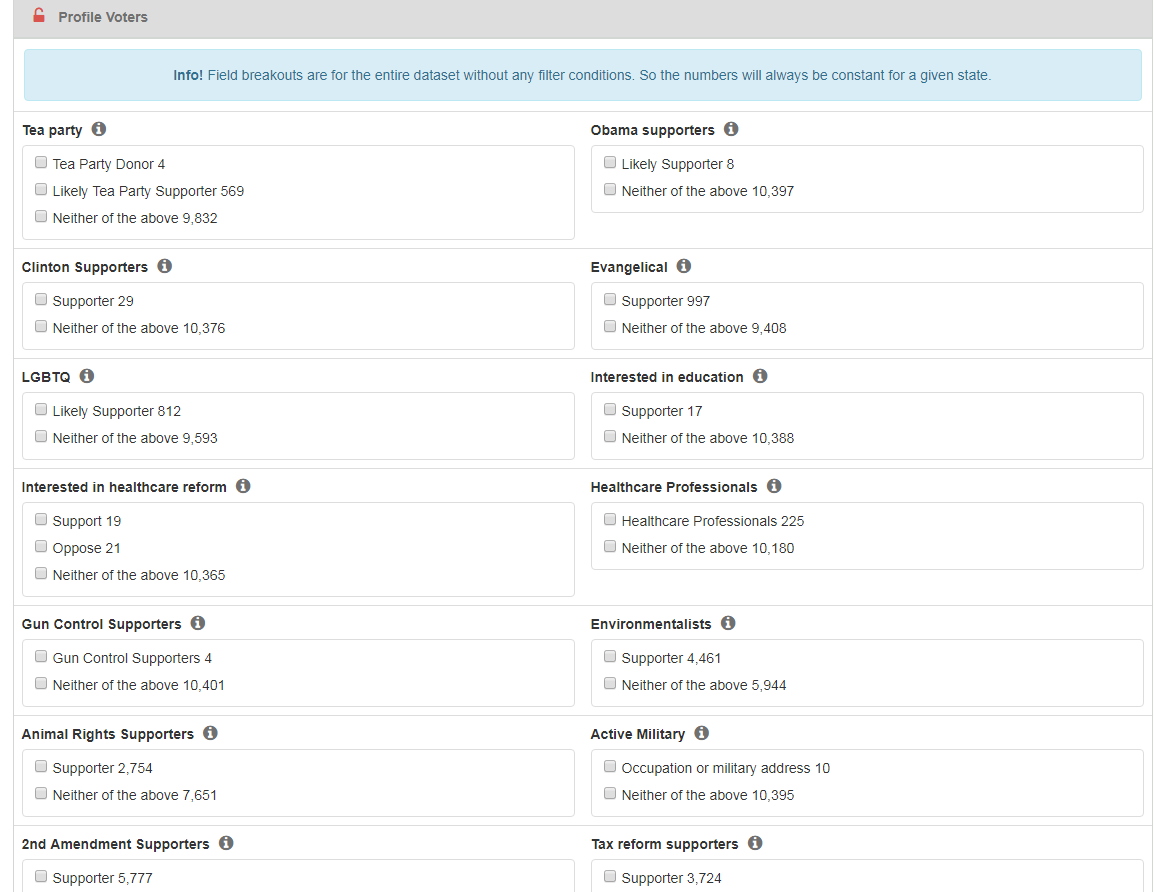 The last option within “Voter History” selection includes actual voter history. Users may choose from different years and elections to be included in the final voter list. 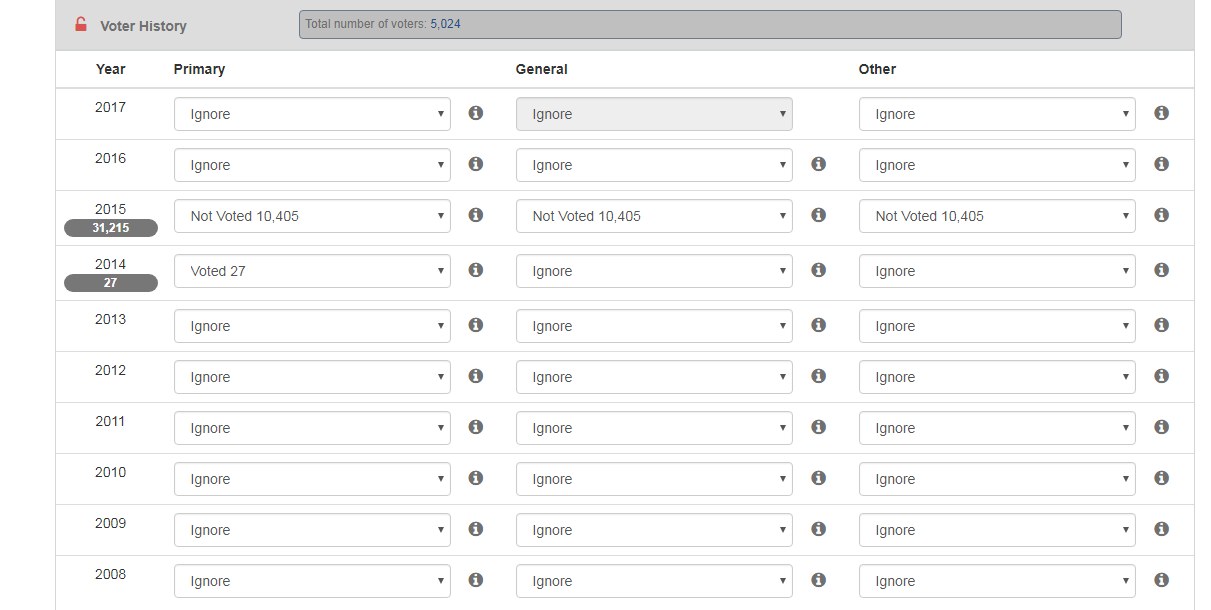 Walk Lists demonstrates the data over the last 10 years, but if the users require data collected over a longer period, they will need to contact Walk Lists for more information. The calculations, on the example of a pool of half million people, showed that if the users go back more than 10 years, the filtered results may be presented in single digits as a number of registered voters selected.

Moreover, the users can select the email option to be included in the voter list where available.

The users can also include a phone number option in the voter list. Landline phone numbers are included for free; however, the users will have to pay a small fee for the cell phone numbers. 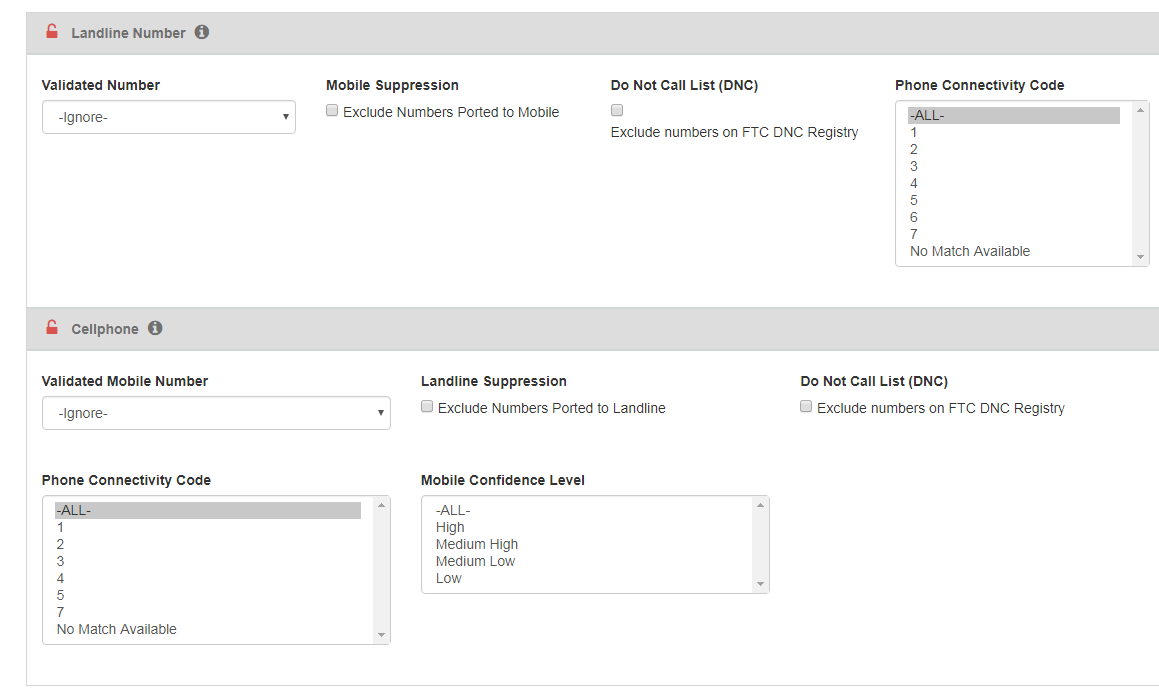 While collecting landline or cell phone information, the users need to make sure they understand the regulations regarding calling to landline or mobile phones as per their state legislation. The campaign risks to attract penalties with incorrect use of phone number information.

Finally, the users can check out at any time during the process and edit their selections.

After the payment was received, the users who checked out as guests will receive an email containing registration information. The registered users will be automatically redirected to the work history screen where they can download their registered voter file. In addition to the file, the users receive access to a guide on how to read the multiple columns that comprise the file.

In conclusion, Walk Lists assist the users in obtaining the registered voter lists in a matter of minutes. Moreover, the users create customized lists tailored specifically to their needs.